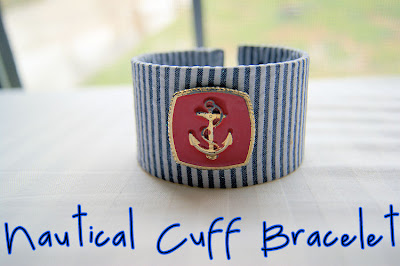 I finished it! Ahh I'm so happy, it came out even better than I imagined. I don't have too many pictures of the process because once I started I had my hands covered in glue and it went kind of fast...but here's a poorly worded breakdown, with fewer pictures than I had hoped for. Enjoy!

First off, though, let me remind you of my inspiration...these gorgeous Chanel Resort 2013 bracelets. (Here's the one picture source I could actually find, they're all over pinterest but most of the links are bad.) 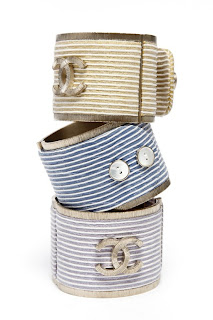 And here's my take: 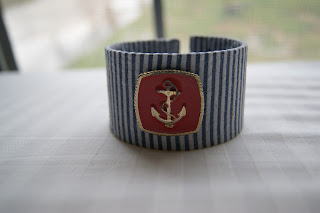 I used a really sturdy cardboard piece from an old roll of tape for the bracelet base...it was kind of small so I cut it open to make it a cuff. Then I measured it, and cut a piece of fabric that was approximately 9" by 5½". (The bracelet part was 2" wide, and I wanted the fabric to wrap around it almost three times...back, front, then back again, if that makes sense.) 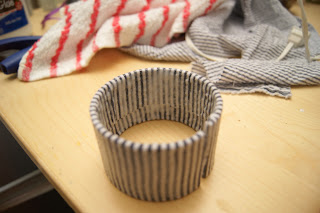 You can sort of see what I mean in this picture. Of course this is after I glued it all...I just used some Elmer's glue with a few drops of water added to make it easier to paint on (I used a paintbrush). I started on the inside, spread glue all the way along the inside, then placed the fabric on top, and then went over it again with glue. Then I did the front part the same way - it was a bit of a challenge to get the fabric folded over the top, and keep it straight along the inside since I did it all at once instead of doing one piece at a time and letting them dry. (Which, in hindsight, might have been easier, but I had poured too much glue and I was trying to use it all at once so it didn't dry out.) Then, I folded it back down on the inside, and spread a few more layers of glue on there. 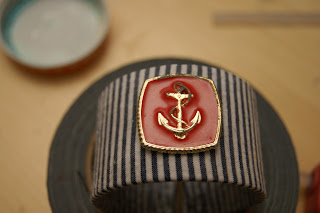 I let all that dry for a few hours, then went back and added the anchor charm onto the front with hot glue. 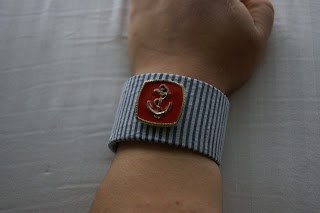 And then I let that dry overnight, and now I have an awesome new cuff bracelet, made for free because I used stuff I already had lying around.

Not Just a Housewife's Show Me What Ya Got