I actually woke up in a really productive mood today and made chili, which I'll be sharing my recipe for today, and also started working on my angora sweater accessories. I finished the hat and leg warmers, but am still working on making gloves so I'm going to hold off and share that tomorrow. I may not have won the 31 day challenge (I know it wasn't a challenge, and I know there is no winner; I'm just talking about my own desire to actually do it) but I started strong, and I plan on finishing strong, so I think not giving up counts for something, right?!

Anyway. My chili. It's based on a recipe I found online a few years ago (I don't remember where) and have tweaked and messed with until I perfected it. It's been eaten by a pretty good number of people, and I've never had anyone not like it. I have had people not be able to finish it because of the heat (it's hot. like, HOT.) but even then, they tried. (I'm not bragging. Just sayin' if you make it, they will come.) So here's the recipe + the process, and if you try it, let me know how you like it!

(Fair warning: it really is hot. So if you're not tolerant, or will be serving it to children or weaklings, tone it down by eliminating the serranos or cutting back on the overall number of peppers.)


Part I: The ingredients. 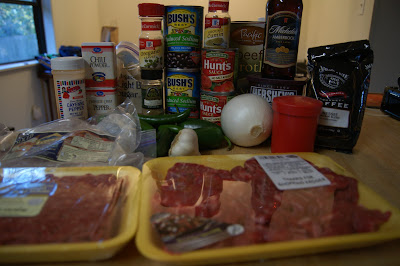 Also: A crock-pot to cook it in. 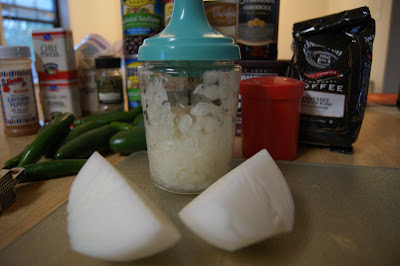 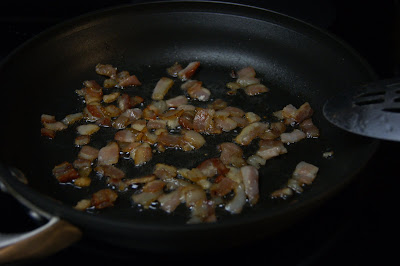 Start by making sure you have everything you're going to need clean and easily accessible. Once you get started you don't want to have to be stopping every few minutes. Now, I start off with the bacon. I cut it up into tiny pieces with my kitchen scissors and let it cook low and slow. While that's going I chop up my onion. I have a handy dandy little chopper thing ($4.00 at the flea market, and worth it's weight in gold) that makes this easy and keeps me from getting the onion cries. Toss the onion in a separate, larger pan and start it cooking (low) too. Add the three cloves of garlic. Once the onions are clear, add the meat and turn the heat up a little. You just want to brown the meat. Meanwhile, check on your bacon, it's probably done. Let it rest on a paper towel while you chop up the peppers. Once the meat has browned properly, you're ready to move on...

Part III: Bringing it all together. 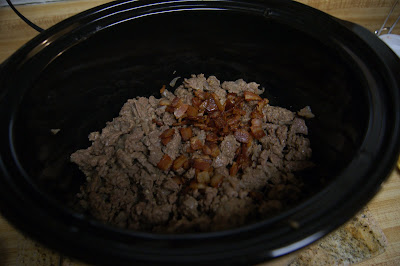 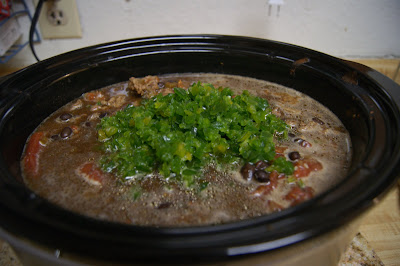 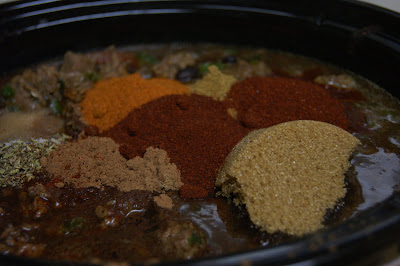 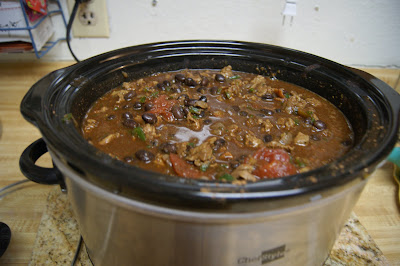 Now that everything is ready to go, you just have to toss it in the crock-pot and let it work it's magic! This is my favorite part though, I love adding things one at a time and watching it all come together.

Personally, I start with the meat and bacon, then add the black beans, coffee, beer, tomatoes, and peppers. Give it a good hefty stir, then start adding your spices. I always save the beef broth for last because sometimes I don't have room for the whole can, and I like to make sure I get all the important stuff in first! :)

Now for the hard part; the waiting! You can cook it one of two ways: 4 - 6 hours on high, or 8 - 10 hours on low. I've tried it both ways, and I've even done it 4 hours on high, then another 4 hours on low. It's one of those things that isn't an exact science so don't worry too much. The longer you leave it the thicker and better it will get.

And that's it. Let it cook up real good, making sure you stir it often especially if you cook it on high, and then ENJOY.